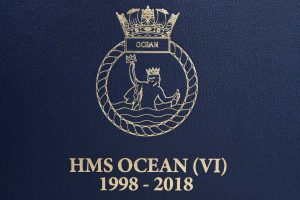 HMS Ocean (VI) 1998 – 2018 The Mighty ‘O’ was written on behalf of HMS Ocean to mark the decommissioning of the Royal Navy’s Fleet Flagship in the presence of her sponsor, HM The Queen, on 27 March 2018 in Devonport Naval Base.

Drawing on official records and interviews with a cross section of those who have served in Ocean, including the majority of the former Commanding Officers, this book is the first account of the Royal Navy’s only purpose built helicopter assault carrier HMS Ocean, from her origins in the early 1950s to her paying off ceremony in 2018. This book follows in the long line of commission books that have been published by the Royal Navy’s warships for over a century and is intended to serve as a lasting record of Ocean’s rich heritage for members of the final Ship’s Company. The HMS Ocean Decommissioning Committee, which instigated the production of this book and invited me to write the story, wanted to share the ship’s action packed history with a much wider audience and decided to make part of the print run available for sale to the general public via Navy Books.

The completion of the sixth ship to bear the name Ocean in 1998 represented the dawning of an exciting era for the Royal Navy when she became the first of a new generation of amphibious ships to join the Fleet. Designed from the outset to project the Royal Marines by air and sea, Ocean marked a considerable step change in capability compared to her converted predecessors. This was swiftly put to the test during her hot weather trials when she provided humanitarian assistance in the Caribbean to the victims of Hurricane Mitch. This dramatic, unexpected twist to the ship’s programme set the precedent for an action packed career in which Ocean has rarely completed a deployment in accordance with the original plans.

During two decades of high tempo operations, Ocean has been deployed across the globe from the Arctic Circle to the West Coast of Africa, from the Mediterranean to East of Suez and both North and South America, while fulfilling a diverse range of roles including supporting the 2003 invasion of the Al Faw Peninsula; launching helicopter strike missions to protect Libyan civilians in 2011; supporting the security operation for the 2012 London Olympics; counter piracy operations, intercepting drug smugglers; delivering humanitarian relief; trade promotion; defence engagement with key allies and serving as the Fleet Flagship. Ocean has also earned the affection of Sierra Leone’s people who refer to her as the ‘Angel of the Seas’ due to her repeated deployments to the nation at pivotal moments in its recent troubled history. Ocean’s primary purpose throughout all of these operations has been to enable the embarked air and land forces to fulfil their missions. The ship’s versatility has been clearly demonstrated since 1998 by the routine embarkation of units from all three services, as well as, detachments from the Armed Forces of other nations.

The ship’s story came full circle during her final deployment when she was diverted from the Mediterranean to deliver humanitarian support to British Overseas Territories in the Caribbean and the wider region in the wake of Hurricane Irma. Afterwards, Ocean returned to the Mediterranean to conclude her operational career at the heart of international defence activity as the Flagship of the Standing NATO Maritime Group 2.

Painting a vivid picture of life on board one of the Royal Navy’s most important warships of the 21st Century, the author brings Ocean’s story alive using interviews and first-hand accounts. As part of his research the author has interviewed a representative cross section of those involved in the ship’s rich heritage from junior sailors, Royal Marines and members of the embarked squadrons, to nearly all of the former Commanding Officers, as well as, those involved in the events leading up to her construction, the development of her design and completion by VSEL’s Barrow-in-Furness shipyard. The book is fully illustrated throughout with a rich selection of photographs, the majority of which have been reproduced in full colour, and as such it is sure to appeal to all with an interest in the Royal Navy and its warships.

New books on the way