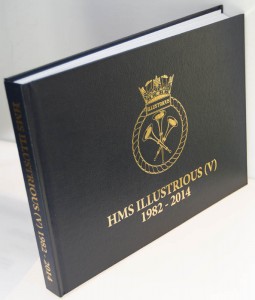 The National Museum of the Royal Navy held the official launch for my latest book HMS Illustrious (V) 1982 – 2014 on 21 September 2015. I was very honoured to be joined by three of the ship’s former Commanding Officers, Admiral Sir Jock Slater GCB LVO DL, Admiral Sir Jonathon Band GCB DL and Captain M K Utley OBE RN who kindly gave presentations about their time in command of this great ship.

Dale McEwan of That’s Solent TV produced a very good piece about the launch which can be seen via this link Book Launch Film. Sharp-eyed viewers will notice that I should of course said that Illustrious was sent to the Philippines in 2013  in the wake of Super Typhoon Haiyan.