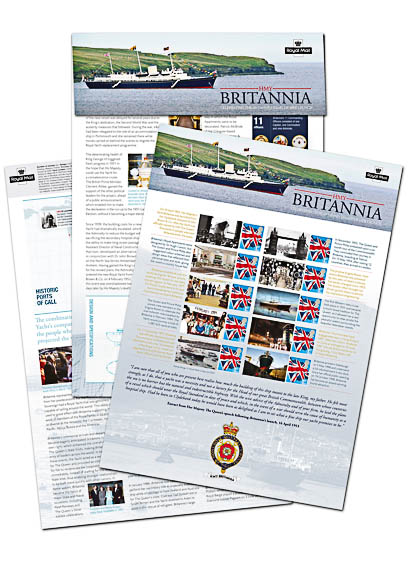 Royal Mail is now accepting advance orders for its latest commemorative sheet which marks the 60th anniversary of HM Yacht Britannia’s launch by HM The Queen on 16 April 1953. This striking sheet will be officially released on the actual anniversary and complements the stamps that will be issued by Royal Mail on 30 May to celebrate  Her Majesty’s Coronation in 1953. I had the privilege of being invited to write the text for this beautifully produced product which is bound to become a highly sought after memento of this famous Royal Yacht.

The sheet is packed full of fascinating facts, figures, stories and photos relating to Britannia – including her launch, historic ports of call and decommissioning on 11 December 1997.

It also contains details of the design and specifications of the Royal Yacht which  played a central role in The Queen’s reign as she travelled across the world, welcoming monarchs, presidents, prime ministers and diplomats on board.

Since opening to the public on 19 October 1998, Britannia has become an award winning tourist attraction which is visited by approximately 270,000 people every year.